Renata Tarragó Fábregas was born in 1927 and died in 2005. She was a Catalan guitarist and vihuelist, teacher and performer. She was the first female guitarist to record Joaquín Rodrigo’s „Concierto de Aranjuez“, and was the editor of the first published edition of the „Concierto de Aranjuez“ score. At the age of 14 Renata Tarragó made her first public appearance and was appointed an assistant Professor at the Barcelona Conservatory upon the completion of her studies there in 1944. In 1951 she was awarded by the Barcelona Conservatory with the „Premio Extraordinario“ for her artistic accomplishments. Tarragó played guitar accompaniment on numerous recordings with the soprano Victoria de los Ángeles. She was the first to edit the Aranjuez score for publication in 1959 and Rodrigo’s esteem for her was evidenced by the dedication of his „Sonata Giocosa“ to her in 1960. She concertized all over Europe but also in South Africa and the Soviet Union and made her debut in the United States in 1960. In Tokyo she represented her country at the „International Congress of the Guitar“ and won a gold medal for her performance. In 1962 she gave a concert in New York and played the vihuela and guitar. The New York Times wrote about this concert: ‚A musically sensitive performer, the beautiful Spanish artist explored the ranges of tonal subtlety and nuance. About the guitar maker: Enrique Garcia was born in Madrid in 1868. In 1883 he began an apprenticeship with José and probably also with Manuel Ramirez. A huge impact had the fact that he won the first price at the Chicago World Fair in 1893. Two years later he left the Ramirez workshop and concentrated on his career in his own workshop. Garcia can be seen as the founder of the Barcelona school of guitar making. He influenced many other guitar makers from Barcelona like Enrique Sanfeliù, Ignacio Fleta, Francisco Simplicio and many more. He was the most important guitar maker at the beginning of the 20th century and his guitars were played by Domingo Prat and Francisco Tarrega. The guitar has a beautiful equilibrated tone. Very nice and warm basses which is typical for these model with tornavoz. This guitar is in very good condition and has only two repaired cracks on the left and the right side on the top and one repaired crack on the back. The tuning machines are original. The original case is available. 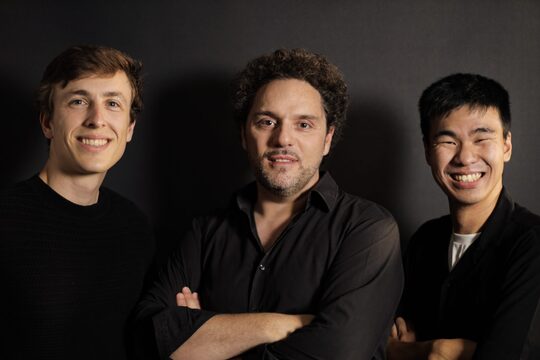